From the Garden. Magnolias: The Aristocrats 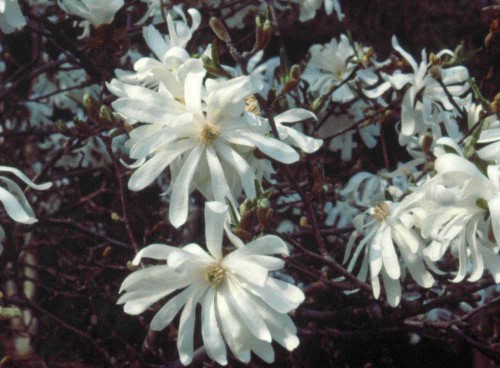 Ernest H. Wilson (1876 -1930), a noted plant collector, who became famous for making Arnold Arboretum at Harvard University one of the most diverse gardens in America proclaimed:

“Aristocrats of ancient lineage possessed of many superlative qualities are the magnolias. they have the largest flowers and largest individual leaves of any hardy group of trees. No other genus of hardy or half-hardy trees and shrubs can boast so many excellences.”

Wilson would go on to introduce more species of magnolias into cultivation than any other plant explorer. Indeed, he felt magnolias were among the most cherished group of trees that gardeners should cultivate.

Magnolias are native to eastern Asia and the eastern Americas north of the equator. There are about eighty different species and they can range in size from small shrubs to large trees. Their leaves can be evergreen or deciduous (dropping their leaves in winter), and their flowers can vary in size, color and scent. Unlike many plants, magnolias are not pollinated by bees, but by beetles, which crawl between the overlapping petals of an unopened flower for the pollen hidden inside, a rich food source. The seed pods split open when ripe and reveal seeds in shades of red, pink or orange. Some deciduous magnolias start blooming as early as late January in our area. With the variety of species available, we can have blooms until June or July.

The most well-known magnolia in the South is, of course, the southern magnolia (Magnolia grandiflora), the ‘elegant aristocrat of American trees’ and the most widely planted of ornamental trees. It is native to the southeastern United States, from North Carolina south to central Florida and west to Texas and Arkansas. In its native environment the tree can reach over ninety feet in height. The large creamy white flowers, up to fourteen inches across, are set against dark green leathery leaves.

When grown to their best advantage, southern magnolias are not limbed up, but the branches are left to grow close to the ground. This hides the fallen leaves and seed pods, and prevents disturbance around their roots which they dislike.

There are many wonderful southern magnolias growing at Ferrell Gardens. Most prominent is the large magnolia grove along Vernon Road, planted by Ida Callaway sometime between 1911 and 1936. Even older are the southern magnolias that were planted to create ‘Magnolia Walk’. We believe some of these trees, planted by Sarah Ferrell, date back to the late 1870’s. These flowers perfume the gardens during the hot summer days with their wonderful fragrance.

Our North American native magnolia species have been introduced to Europe and Asia, and likewise the Asian species have found their way here. The first Asian introduction to America, in 1789, was the Yulan magnolia or lily tree (Magnolia denudata). A year later the purple magnolia (Magnolia liliiflora) was brought from China and the crossing of these two species resulted in the well-known saucer magnolia (Magnolia x soulangiana). There is a Yulan magnolia at Hills & Dales Estate which was planted by Alice Callaway in 1968 and is now approximately 30 feet tall. It is among the earliest flowering magnolias, and usually in February the leafless tree is completely covered with white flowers, six inches across, that illuminate the garden and lift our spirits. However, since it flowers so early, its blooms are frequently susceptible to damage by frost. A few fortunate souls are privileged to see this beautiful sight if they venture into the gardens in the winter.

The bark of many magnolia species and hybrids emit a pleasant resinous aroma when cut or bruised and many have medicinal qualities. The first reference to the Chinese using magnolias medicinally was in 1083, published in the Chinese Pharmaceutical Natural History. The species most often used was the hou-po magnolia (Magnolia officinalis) which was introduced into cultivation in North America by Ernest Wilson in 1900. The bark of this species was used to treat coughs and colds. This required that the bark be stripped and boiled, which caused the tree to die and ultimately resulted in its disappearance from its native habitats. The more common Magnolia officinalis var. biloba was introduced in 1936 and there are three growing in the gardens, started from seed by Alice Callaway.

Even though the basic design of the gardens here has not changed since its beginning, obviously many plants have been added and others removed. A gift left by Alice Callaway during her 62 years of tending the gardens was the addition of some fifteen different species and hybrids of deciduous magnolias that fill the garden with colorful blooms in late winter and early spring when little else is blooming. We invite you to come and share them with us and perhaps be one of the privileged few to see the Yulan bloom.

Winter Artistry For the Garden

From The Garden. Tea, Anyone?