From the Garden, Ginkgo: A Living Fossil 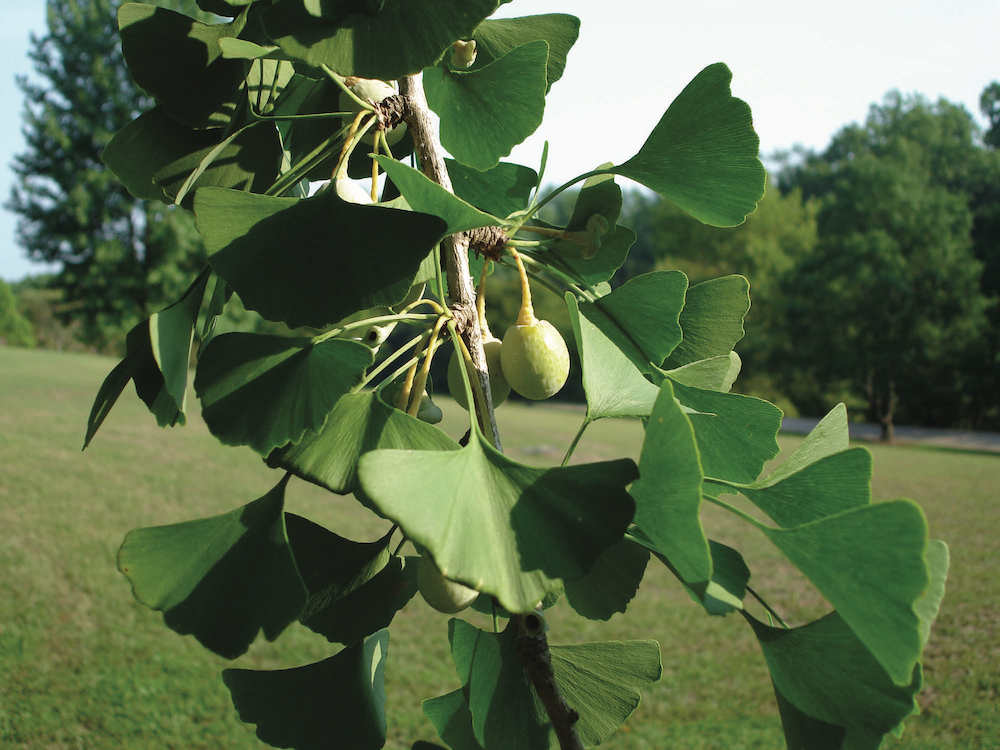 “The trees are God’s great alphabet: With them He writes in shining green across the world His thoughts serene.” wrote American poet Leonora Speyer. Sarah Ferrell, a devout Christian, who created the wonderful Ferrell Gardens at Hills & Dales Estate may have had these same thoughts when she planted a ginkgo (ginkgo biloba) tree in the gardens about 1850. This tree, one of the largest ginkgos in the southeastern United States, is one of our most treasured trees and one of only a few trees to survive from Sarah’s time. It serves as a testament to her extensive plant knowledge since in the mid 19th century ginkgos were quite rare in cultivation.

The ginkgo tree has a very interesting history and is perhaps best described as a “living fossil” since it is considered the oldest living tree species on earth and the only survivor of the primitive order Ginkgoales. From leaf fossils we know this unique tree was alive during the Jurassic or Reptile Age, between 206 and 144 million years ago. Several million years ago the ginkgo disappeared from the fossil record in North America and Europe and was thought to be extinct. However, in 1691 Engelbert Kaempfer, a German botanist and physician, discovered the tree growing in Japan. After its rediscovery, the tree became a curiosity in the finest European gardens. Ultimately, horticulturists brought the tree to America and by 1784 a ginkgo was growing in the garden of William Hamilton near Philadelphia.

It is from the fan-shaped leaves that the tree acquired its common name of Maidenhair tree. Ginkgos can reach a height of 130 feet and the crown can become quite broad with age. The ginkgo is very long-lived and some specimens in Japan are well over 1,000 years old. It thrives in full sun and average soil and is very resistant to infection, pollution and destruction by fire. A remarkable example of this is the account of when the atomic bomb was dropped on Hiroshima in August of 1945 and several months later a ginkgo situated near a destroyed temple had sprouted new leaves. Because of their durability, longevity and beauty, the ginkgo makes an excellent urban and shade tree and will thrive where other trees cannot.

The tree is dioecious, meaning some trees are female and others male. The male plants bear small pollen cones and the female trees produce the seed. The seed is approximately one inch long, light yellow, soft and fruit-like and quite scented. It contains butanoic acid, the same chemical that gives rancid butter its unpleasant odor. This is why when you plant a ginkgo it is important to plant only male trees.

Over the last few decades, hundreds of studies have been done giving clinical evidence that support the medicinal value of ginkgo. The leaf extracts have been used for centuries in traditional Chinese medicine. The extract is widely touted as a tonic for the heart and according to some studies may enhance brain function and actually improve memory. The inner seed is also used after being processed by steaming, stir-frying or roasting. There are reports of the seed being toxic if eaten in larger quantities (more than 5), and they are not often used in Western herbal medicine.

Sir Albert Seward (Professor of Botany at the University of Cambridge) said of the ginkgo, “It appeals to the historic soul: we see it as an emblem of changelessness, a heritage from worlds too remote for our human intelligence to grasp, a tree which has in its keeping the secrets of the immeasurable past.” This statement rings true when you look at the 160-plus-year-old ginkgo next to the Church Garden at Hills and Dales Estate. It is a beautiful sight in the fall when the ginkgo leaves turn a brilliant yellow and fall within a short span of time (seemingly overnight), blanketing the ground and shrubs below with a veil of gold. This majestic tree is certainly a link between the present and past of the people who have planted and tended this garden for over 170 years.

From the Garden. Magnolias: The Aristocrats

A Ferrell Legacy: Gifts from Descendants