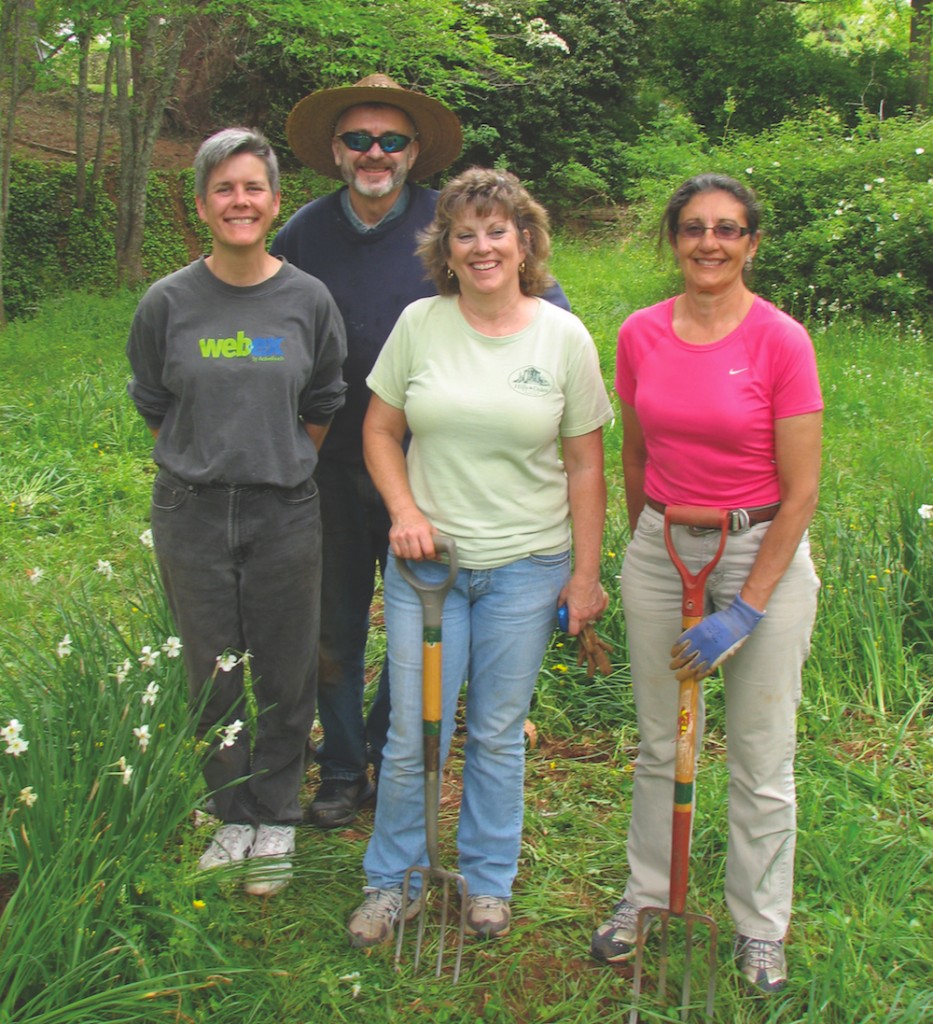 Before you know it spring will be here and gardeners who planned well and worked hard in preparation for the season will be able to enjoy the flowers of their labor. This year, we look forward to seeing our efforts pay dividends when more heritage daffodils bloom in the meadows at the estate due to our efforts last spring.

In April 2013, Hills & Dales Estate staff members Jo Phillips, Tina Eturralde and Carleton Wood traveled to Alpharetta at the invitation of Sara Van Beck, who is active in the Georgia and Florida Daffodil Societies.  The purpose of our trip was to recover heirloom daffodils from the garden of John Lipscomb. John is a daffodil collector and has amassed a collection that includes a large number of old and rare varieties.  Having reached a point in his life where tending the extensive bulb plantings is difficult, he and daughter Su decided to share some of the bulbs with organizations interested in bulb preservation. With direction from Sara, we collected a significant number of two different varieties: ‘Fortune’ and ‘Twin Sisters’.   ‘Fortune’ was hybridized by W.T. Ware in England in 1917 and at the time was hailed the largest and best orange daffodil. While it is widely grown today, when it was first introduced single bulbs were very valuable and would sell for £50 per bulb. ‘Fortune’ has proven to be a very reliable grower in the heat of the South and is the parent of numerous more varieties including the hugely popular ‘Carlton’. According to Phillips: “It is interesting that ‘Fortune’ came out just one year after Fuller and Ida moved into their new home at Hills and Dales in 1916. Given its popularity over the intervening years, it’s a great daffodil to add to the estate and likely one that Ida and Alice both grew in the garden.”

The second daffodil we collected was ‘Twin Sisters’ whose record of ornamental use dates back to 1597. This daffodil’s frequent appearance in historic cemeteries has also earned it the nickname “Cemetery Ladies.” This variety is also found in abandoned gardens and around old homesteads, which is usually a trustworthy indicator of toughness and adaptability. As you might expect, it has proven to be a dependable performer across most of the South, a characteristic that isn’t true of all daffodils. It is easy to recognize with its creamy white perianth (petals) and small clear yellow cup on blossoms that almost  always, as the name suggests, occur in pairs. While this variety isn’t entirely new to Hills and Dales (it’s been growing at the south end of the greenhouse as long as anyone remembers) we now have many more planted in the meadows around the estate thanks to this dig.

Mark your calendar for late February to see ‘Fortune’ and late March to early April to see ‘Twin Sisters’ daffodils showing their color in the grassy meadows. A special thanks to John Lipscomb,  Sara Van Beck and the Georgia Daffodil Society for making these wonderful new additions to the estate possible.

A Ferrell Legacy: Gifts from Descendants