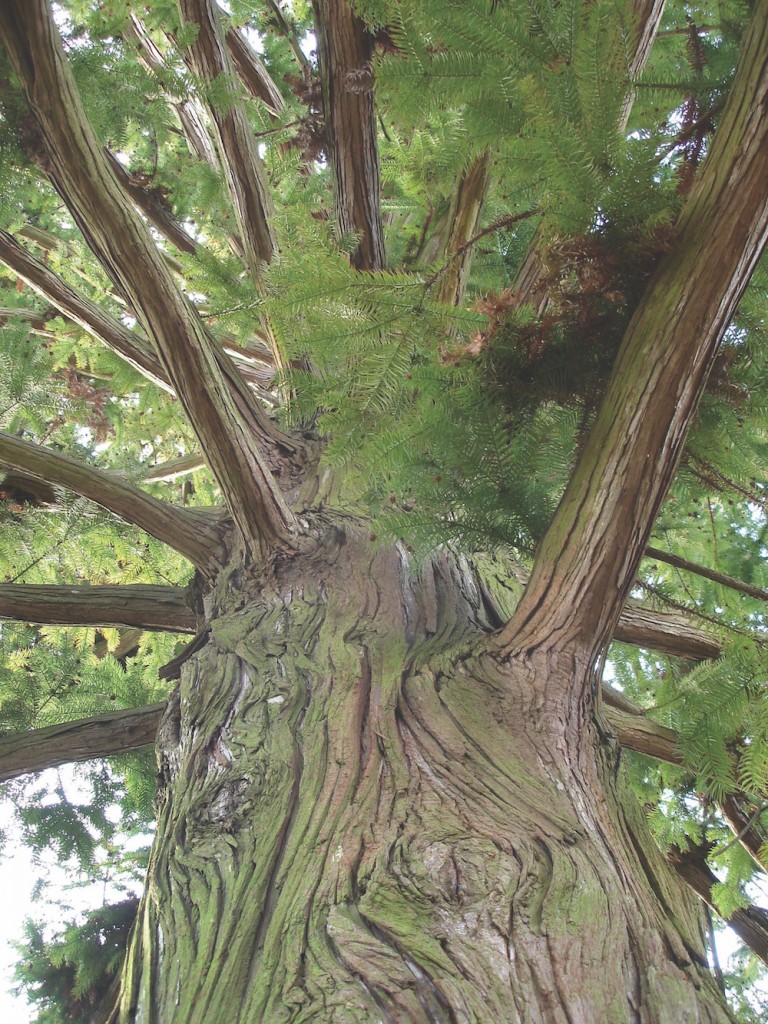 Standing sentinel over the Church Garden in the antebellum boxwood garden at Hills & Dales Estate is a giant conifer that rarely escapes notice– especially with new visitors, who often inquire about its identity as well as its age. It is a China fir tree, known botanically as Cunninghamia lanceolata. It has been a part of the landscape here for the better part of a century and a half, having been planted by Mrs. Sarah Ferrell circa 1850’s.

Rising to a height of over 60 feet, our tree spreads its whorled evergreen branches over a width of about half that distance, its exotic appearance owing to their horizontal, tiered arrangement and slightly pendulous tips. China fir was introduced into cultivation in this country in the early 1800’s, but was discovered in its native habitat about 100 years earlier by Dr. James Cunningham, and was subsequently named after him. While probably still rare when Mrs. Ferrell acquired it, it was obviously available, and possibly was purchased from the renowned Fruitland Nursery in Augusta, GA. The scale of the tree lends itself suitably as an estate tree since its ultimate size can reach 150 feet.

Cunninghamia can adapt to different soil types but requires well-drained, acidic conditions. It thrives in the deep South, where winters are mild enough not to kill the tips of the tree’s branches. It is sometimes mistaken for Araucaria araucana, or monkey puzzle tree, which is similar in appearance and size, but not well adapted for much of the Southeast. China fir is noted for being a very valuable timber tree in its native lands, its durable, rot resistant wood having been used through the ages for the construction of everything from houses and ships to temples and coffins. It can also be coppiced, or cut to the ground and re-grown, which is highly unusual among coniferous trees, but a useful trait from both forestry and landscaping aspects. The leaves of the tree are lance shaped, sharply pointed and needle-like. They are known for persisting on the tree’s branches for five or more years, eventually dying and then hanging on for several more years. This characteristic is frequently cited as the tree’s major flaw from an ornamental standpoint, reportedly giving the tree a “shaggy” appearance at times. In our experience at Hills & Dales, its good qualities far outweigh any bad. In fact, ours sheds most of its dead as small branches (not as individual needles) in autumn and early winter, and is reasonably tidy the rest of the year. It shrugs off drought and heat, and has no serious diseases or insect pests.

Although they are frequently multi-trunked, the garden’s specimen has a single, massive one that rises straight up out of the pea-gravel around it, revealing few surface roots. Its bark is brown and long fissured, displaying grooves of reddish- brown inner bark. A slight bloom of pale green algal growth is visible on the outer ridges of the trunk, which adds to its character by lending a verdigris effect. Alice Callaway admired its trunk very much, likening it to a sculpture cast of bronze—a fitting tribute, indeed, for a very worthy tree.

A Bit of Fall Perfume

From The Garden. Tea, Anyone?